The Vatican delegation to the United Nations this week spoke on the issue of universal jurisdiction at a session of the UN General Assembly.

It could be an important tool to ensure accountability and prevent impunity in case of serious violations of international humanitarian law and human rights, and to offer redress to victims,” – said Archbishop Bernardito Auza, the Permanent Observer of the Holy See to the United Nations – “When traditional bases of jurisdiction are unable to address some heinous crimes, and when no international tribunal has competence, universal jurisdiction could become a necessary tool.”

The last time was last year:

Pope Francis has joined his papal predecessors in calling for a World Government. In his latest encyclical letter, Laudato Si’, the Vatican leader wrote a dissertation on environmentalism, laying out a litany of “sins” against “Sister Earth” which he thinks should be combated by a new “world political authority.”

According to the pope, these eco-crimes include “excessive anthropocentrism” at the expense of nature, destruction of forests and wetlands for the purpose of agricultural cultivation, and human-caused global warming caused by greedy consumption of fossil fuels. The pope opined that increased use of air-conditioning is particularly corrupt.

The Catholic leader also advocated for government-enforced social justice. He wrote that wealthy nations owe a “social debt” to the poor and impoverished people of the world, a debt which can be paid by increased funding and “better distribution of wealth.”

Manmade global warming is itself of course a total scam to be used as a pretext for global taxation, government and depopulation.

In the face of the unrelenting growth of global interdependence, there is a strongly felt need, even in the midst of a global recession, for a reform of the United Nations Organization, and likewise of economic institutions and international finance, so that the concept of the family of nations can acquire real teeth. One also senses the urgent need to find innovative ways of implementing the principle of the responsibility to protect and of giving poorer nations an effective voice in shared decision-making. This seems necessary in order to arrive at a political, juridical and economic order which can increase and give direction to international cooperation for the development of all peoples in solidarity. To manage the global economy; to revive economies hit by the crisis; to avoid any deterioration of the present crisis and the greater imbalances that would result; to bring about integral and timely disarmament, food security and peace; to guarantee the protection of the environment and to regulate migration: for all this, there is urgent need of a true world political authority, as my predecessor Blessed John XXIII indicated some years ago. Such an authority would need to be regulated by law, to observe consistently the principles of subsidiarity and solidarity, to seek to establish the common good, and to make a commitment to securing authentic integral human development inspired by the values of charity in truth. Furthermore, such an authority would need to be universally recognized and to be vested with the effective power to ensure security for all, regard for justice, and respect for rights. Obviously it would have to have the authority to ensure compliance with its decisions from all parties, and also with the coordinated measures adopted in various international forums. Without this, despite the great progress accomplished in various sectors, international law would risk being conditioned by the balance of power among the strongest nations. The integral development of peoples and international cooperation require the establishment of a greater degree of international ordering, marked by subsidiarity, for the management of globalization. They also require the construction of a social order that at last conforms to the moral order, to the interconnection between moral and social spheres, and to the link between politics and the economic and civil spheres, as envisaged by the Charter of the United Nations.

Also, take note of the fact that the word “catholic” itself originally means “universal”. So, Catholicism = universalism, i.e., globalism or internationalism. No wonder they call for world government, and in fact, the Catholic church can well be said to be the mother of all globalism.

People who know about occult numerology are aware that number 13 is  the Masonic signature number along with 11 and 33, and that the most important symbol for Freemasons is the All Seeing Eye, along with the pyramid/triangle, which can both be found on the dollar bill.

As it happens, the goal number 13 of the UN Sustainable Development Goals outlined in the Agenda 2030 is “climate action”. What’s more, there’s also an All Seeing Eye on the logo.

If you’ve found your way into this blog you’ll already know that climate change or manmade global warming is complete hogwash, propaganda for global government and depopulation, originally brought to you by the global elite think tank Club of Rome. And, as you can see, they’re rubbing it in our faces. 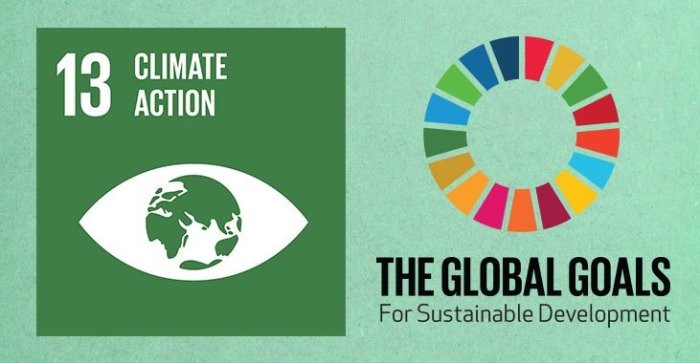